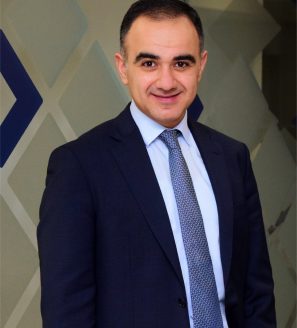 Prior to joining AMX in 2017, Hayk Yeganyan spent 4 years at the Central Bank of Armenia as the advisor to the Governor covering areas related to capital markets development, accumulative pension savings industry and being in charge of attracting foreign financial institutions into Armenia, covering both business development and relationship management aspects. During his tenure, he also served as member of the Supervisory Board of NASDAQ OMX Armenia for 1 year. Before joining the Central Bank of Armenia, he spent several years in London working within the private banking industry covering Russia and CIS region, and parallel to that also acting as the representative of the Armenian Development Agency in the UK. He started his career at Gazprom Armenia in 2006, where from 2007 to 2010 he served as head of securities market operations department, acting as company’s pre-IPO internal lead manager. During that period together with his team, he successfully organised the first two public bond issuances in Armenia in 2007 and 2008. He holds a B.A. in Financial Economics from University of Leicester (UK), and MSc in Management from Imperial College London. Hayk Yeganyan is a member of the Supervisory Board of Central Depository of Armenia, OJSC.