For the first time in history, the Romanian capital market is included, starting from September 21st, 2020, in the Emerging Markets indices, according to the classification of the global index provider FTSE Russell. The promotion of Romania to the Emerging Market status after 25 years from the re-establishment of the local stock exchange, a fundamental institution of the Romanian capital market, represents an unprecedented success.

“The story of the Bucharest Stock Exchange is, for the most part, the story of modern Romania and is part of our national DNA because it demonstrates the ability of this nation to mobilize itself to achieve an extremely ambitious country goal. The stock exchange was re-established in 1995 after being closed for almost half a century, immediately after the installation of the Communist regime in Romania. We started everything from square one. Since then and up until now, after a quarter of a century of work and alignment with the highest standards, the Romanian stock market has reached the level of requirements imposed by our international peers. Never in the recent history of the country has there been such an extensive economic project that would require so much effort and determination over such a long period of time. And above all, today we recognize and celebrate that Emerging Romania is more than BVB’s project, it is the project of our country”, stated Radu Hanga, Chairman of the Board, Bucharest Stock Exchange.

“We are witnessing a historic moment. It is a clear and indisputable international recognition that the Romanian capital market receives. It is more than a validation of the values ??promoted by the capital market; it is a validation of Romania’s efforts to be included in an unprecedented investment universe. I would like to say thank you to all the stakeholders involved in the capital market, and to the authorities that have been close to the stock market throughout this process. I am especially honored to lead the team that made this moment possible, and I place my trust in our common ability to take action and achieve goals that will be remembered throughout history”, said Adrian Tanase, CEO of the Bucharest Stock Exchange.

The effective promotion to the Emerging Market status will allow the Romanian capital market and economy to absorb new funds in the coming years and sends a strong signal to privately-owned and state-owned companies that they can grow significantly via the stock market. New investment funds that manage billions of euros will be able to invest in the Romanian companies listed on BVB, which was previously impossible due to the restrictions generated by the country’s former Frontier Market status.

Two Romanian companies, Banca Transilvania (TLV) – the most traded company from BVB – and Nuclearelectrica (SNN) – a BVB-listed company in which the Romanian state is the majority shareholder – have met the necessary criteria to be included, starting from September 21st, in the All-Cap indices dedicated to Emerging Markets according to the classification of the global index provider FTSE Russell. The contribution of the two companies was decisive for the upgrade of the entire market, as the promotion took into account the presence of companies in the All-Cap indices (which include Large, Medium, and Small Capitalization companies, excluding the Micro-Sector).

Banca Transilvania becomes the first privately-owned Romanian company listed on BVB that is included in the FTSE Russell indices dedicated to Emerging Markets.

“23 years ago, when we were listed on the Bucharest Stock Exchange, we were a small bank with a capitalization of 10 million dollars. Today we are delighted to contribute from a leading position both in the banking sector and in terms of liquidity on the stock exchange to Romania’s inclusion in the FTSE Russell index. We hope that our positive experience and success story will inspire and attract other companies to follow us. Since the beginning, we have defined our main objective as supporters of the Romanian economy on all levels and we are glad that we managed to achieve it. As a universal bank, it still remains our firm commitment. We are honored to be part of this historic stage for Romania and for the local capital market”, Horia Ciorcila, Charmain of Banca Transilvania’s Board of Directors, was quoted as saying.

“We are glad that Romania and its capital market are players in a new league, the secondary emerging market. For Romania, it is a great opportunity to stand out in other markets and to leverage on its investment potential. We are honored that Banca Transilvania is one of the two companies that qualified Romania. BT’s admission to the FTSE Russell index for emerging markets implies even a higher responsibility, because Banca Transilvania will become visible to more and more investors. Courage, Romania!”, added Omer Tetik, CEO of Banca Transilvania.

Nuclearelectrica becomes the first majority state-owned Romanian company listed on BVB that is included in the FTSE Russell indices dedicated to Emerging Markets.

“SNN wants stability in the first place and based on this stability a gradual increase. This is the very premise from which I started in 2017 and based on which we constantly build in order to position the company as advantageous as possible, to bring added value and earnings to our shareholders and investors. We are accountable for the wellbeing of the company and equally for the wellbeing of our investors. Our financial results, long-term strategies,  perfectly contextualized to the European and international sustainable growth environment,  and by association the investment projects, are eloquent for SNN in 10, 20 or 30 years from now: a strong company, able to withstand the external dynamics, and we have already seen what sudden dynamics are. The inclusion, starting this autumn, in the FTSE Russell index reflects our efforts and motivation to have a robust company and at the same time to support the development of Bucharest Stock Exchange by attracting new investors”, said Cosmin Ghita, CEO of Nuclearelectrica.

As a result of Romania’s upgrade to the Emerging Market status by including the issuers Banca Transilvania and Nuclearelectrica in the FTSE All-Cap indices, which are representative for the upgrade to the new market status, other Romanian companies listed on the Bucharest Stock Exchange can benefit from the inclusion in the Emerging Market indices. According to the FTSE Russell classification, the first Romanian company that benefits from the market upgrade is TeraPlast (stock symbol TRP). Consequently, starting from September 21st, TeraPlast becomes the first Romanian company included in the FTSE Global Micro-Cap index. The Micro-Sector is not taken into account by the global index provider in the decision regarding the country upgrade, but the inclusion of the Romanian companies in these indices can contribute not only to enhanced visibility but also to attracting capital from fund managers.

“Romania has a new highway that connects us with the whole world, not only with Europe. Following the promotion to Emerging Market status, this highway represented by the capital market will facilitate the circulation of cash flows to and from anywhere in the world. That is why the listing of companies on the stock exchange, whether they are largely state-owned or privately-owned, is the way to the economic and sustainable development of Romania. Continuing the listing process ensures that opportunities are seized and that the capital is accessed in a fast and efficient manner. The main common objective, both in the economic and in the political environment, is the development of Romania”, said Radu Hanga, Chairman of the Board, Bucharest Stock Exchange.

“Romania has the chance to seize the opportunities offered by the new Emerging Market status because there are several candidate companies that could meet the liquidity criterion at this moment. New issuers will be able to enter the FTSE Russell indices if they meet the liquidity criterion in the following evaluations. The consolidation of this newly won status can be achieved only by increasing the number of Romanian companies included in the Emerging Markets indices, and this means that we will have more valuable and stronger Romanian companies, which will contribute to the development of the Romanian economy. That is why we need a close collaboration between the Bucharest Stock Exchange and the authorities, between the business environment and the political environment, so that together we can double, in the next 10 years, the degree of representativeness of the capital market in the economy, from the current level of 10% to 20% of GDP”, concluded Adrian Tanase, CEO of the Bucharest Stock Exchange. 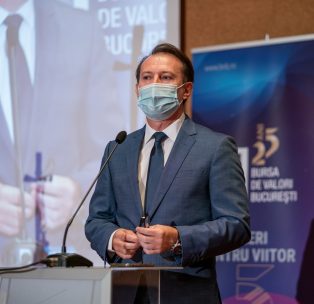 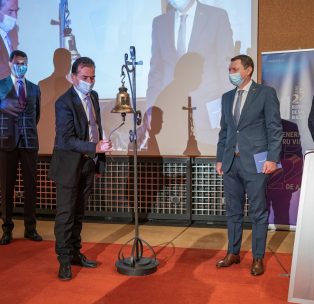 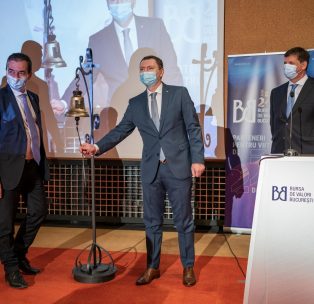