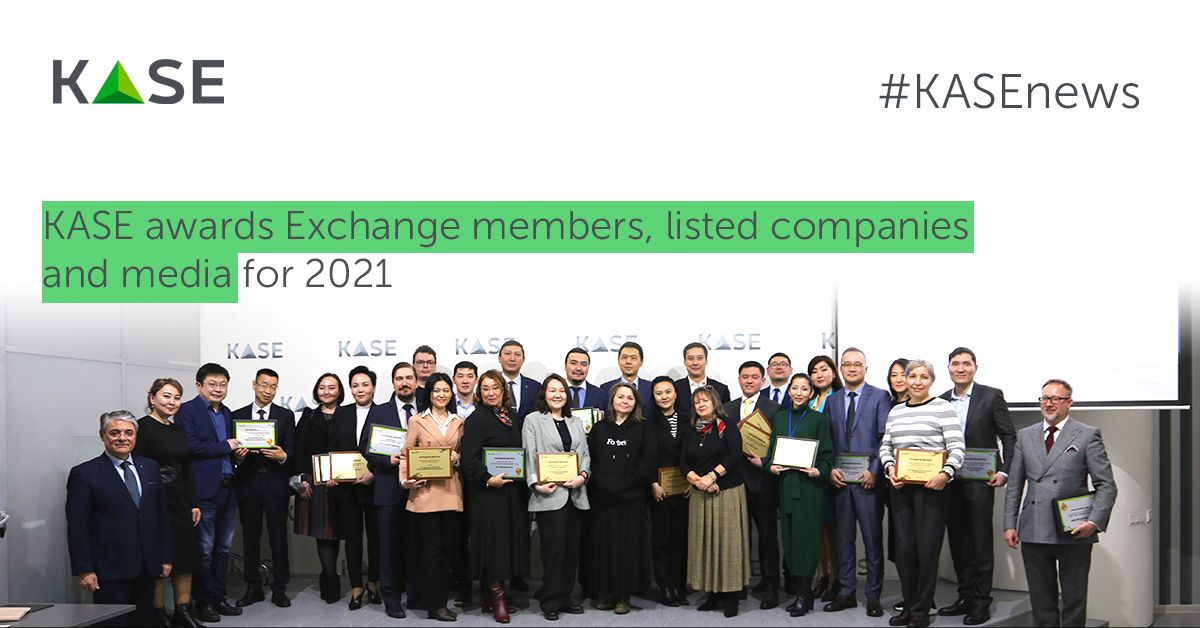 On 15 March 2022, Kazakhstan Stock Exchange JSC (hereinafter – the Exchange, KASE) held its annual awards for 2021: the Exchange members who demonstrated the best results, listed companies – for striving for transparency, as well as media representatives (mass media) – for active coverage of the stock market.

Citibank Kazakhstan JSC was named the winner in the Foreign Currency Market Leader category for 2021.

Freedom Finance JSC was awarded in the nomination “Market Maker of the Year on the stock market”, which was a market maker on shares of 30 denominations. The volume of the Company’s market-maker transactions amounted to more than KZT4 billion and the number of transactions was about 10 thousand.

BCC Invest, a subsidiary of Bank CenterCredit JSC, was named Market Maker of the Year in the Corporate Bond Market category, having acted as market maker on 31 corporate bonds in 2021, with 280 transactions concluded on these securities.

In the Government Securities Market Maker of the Year category, Freedom Finance was the most active.

BCC Invest JSC was awarded in the Best Financial Adviser category. In 2021, the company acted as financial advisor to the largest number of issues – listing 11 issues of securities of 8 issuers.

In 2021 Exchange members were active not only in attracting investors but also in carrying out activities to improve financial literacy of investors. The Exchange decided to award First Heartland Jusan Invest JSC and Centras Securities JSC in the category “For Contribution to Improving Financial Literacy”.

Halyk Savings Bank of Kazakhstan, First Heartland Securities and Kaspi Bank and Halyk Finance were recognised as the best in the category “Support for Exchange Technology Projects”, Kaspi Bank and Halyk Finance. The winners took an active part in implementing the omnibus trading project, in launching the KASE GLOBAL sector, in testing the functionality of the ASTS+ trading and clearing system on the stock market and in upgrading this system’s infrastructure, respectively.

KASE listing companies
The “Commitment to Transparency” diplomas for the year 2021 were awarded to:

For reference
Kazakhstan Stock Exchange (KASE) is the leading stock exchange in in the Central Asian region. KASE ranks second among CIS exchanges in terms of volume of securities trades, and sixth in terms of capitalisation of the FEAS share market.
It is a universal trading platform for corporate and government securities, bonds of international financial institutions, foreign currencies, money market transactions – repo and swap, as well as derivatives.
KASE is a member of the International Federation of Exchanges (WFE), Federation of Euro-Asian Stock Exchanges (FEAS) and other international and domestic professional associations, as well as a member of the UN initiative “Stock Exchanges for Sustainable Development”.
More information: +7 (727) 237 5342, pr@kase.kz