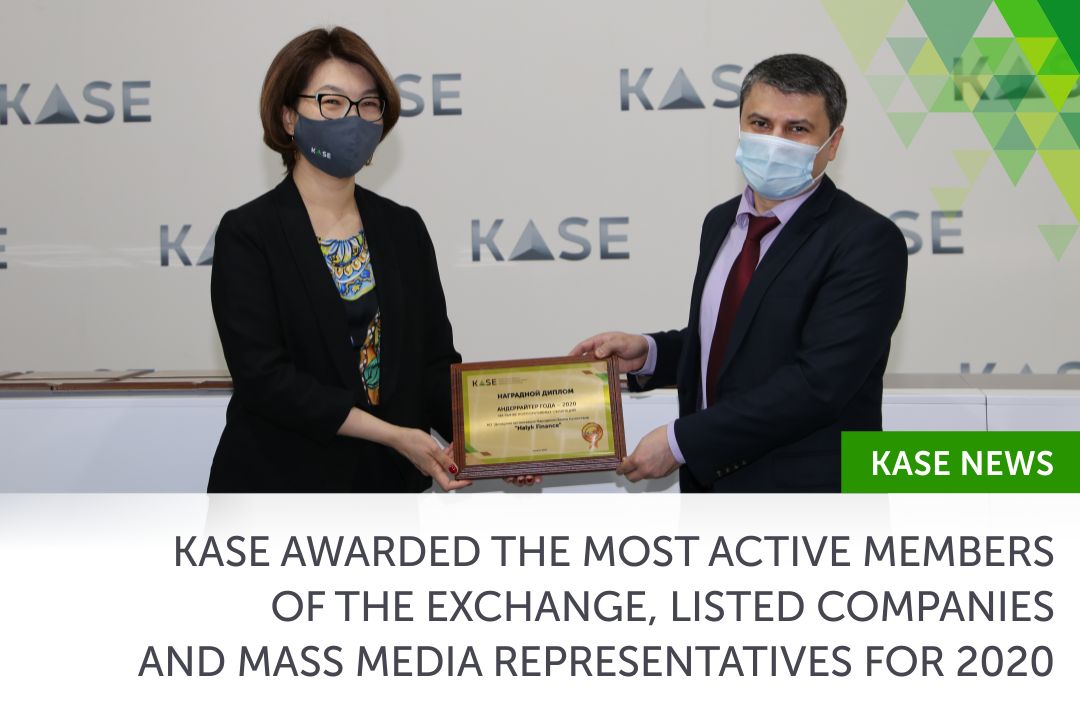 KASE awards the most active members of Exchange, listed companies and media representatives in 2020

Kazakhstan Stock Exchange JSC (hereinafter – the Exchange, KASE) on February 17, 2021 held an annual awarding ceremony based on results of 2020: members of the Exchange, who demonstrated the best results, listed companies – for striving for transparency, as well as representatives of the media– for active coverage of the stock market in print media and Internet resources.

In the nomination “Equity Market Leader” and “Corporate Bond Market Leader”, Freedom Finance JSC ended 2020 with a significant leadership in terms of activity coefficients Ka = 3.80, both on the equity market and on the bond market.

Freedom Finance JSC was also recognized as the winner in the nomination “Leader of the government securities market” for demonstrating the most trading activity in this sector of the exchange market with an activity coefficient Ka = 2.31.

Based on results of 2020, Citibank Kazakhstan JSC was recognized as the winner in the nomination “Leader of the Foreign Currency Market”.

HalykFinance, a subsidiary of Halyk Bank of Kazakhstan, JSC, which was a market-maker for shares of five titles, was awarded in the nomination “Market-maker of the year in the equity market”. The volume of market-maker deals of the Company amounted to more than 2 bn tenge, the number of deals made about 1 thousand.

BCC Invest JSC, a subsidiary of Bank CenterCredit JSC, which in 2020 acted as a market-maker for 14 corporate bond issues, with the volume of market-maker quotes of around 170 mln tenge, was awarded in the nomination “Market-maker of the Year in the Corporate Bond Market”.

Freedom Finance JSC showed the most activity in the nomination “Market-maker of the Year in the Government Securities Market”.

Diplomas “For striving for transparency” based on results of 2020 were awarded to:

These companies are the leaders in terms of information disclosure activity and information content of disclosed documents.

For active coverage of Kazakhstan’s stock market and operations of KASE in 2020, media representatives were also awarded diplomas. These journalists demonstrated a high professional level of presenting material in a comprehensible and interesting form.

In the nomination “For active coverage of the stock market and KASE in print media” diplomas were awarded to Dinara Bekmaganbetova (newspaper “Kursiv”) and Irina Ledovskih.

Kazakhstan Stock Exchange (KASE) is a leading stock exchange in the Central Asian region. KASE occupies the second place among the CIS exchanges in terms of securities trading volume, and the sixth rank in terms of the equity market capitalization among the FEAS exchanges.

It is a universal trading platform for corporate and government securities, bonds of international financial institutions, foreign currencies, transactions of the money market – repo and swap, as well as derivatives. KASE is a member of the World Federation of Exchanges (WFE), the Federation of Euro- Asian Stock Exchanges (FEAS) and other international and local professional associations, as well as a participant of the UN’s “Sustainable Stock Exchanges” initiative.