Meet the Market with FEAS | Securities Market of Armenia

Register Now: Zoom Link
The Federation of Euro-Asian Stock Exchanges is happy to launch the new Event Series “MEET THE MARKET with FEAS”, targeted to introduce the FEAS members’ markets to international investors and other interested institutions.
The purpose of the initiative is to organize virtual Roadshows for FEAS members’ markets to raise awareness about the market structures, operations, processes and benefits, and give the answer to the question-> Why to Invest in a specific country?
By saying this, we would like to invite you all to participate in the first ever FEAS Virtual Roadshow of Armenian Market, taking place on March 17th, at 16:00 Yerevan time (GMT+4). The event is organized together with FEAS Members Armenian Securities Exchange and Central Depositories of Armenia. Moreover, during the event you will meet the issuers and brokerage firms from Armenia, and more.
The presentation will be followed by Q&A Session. 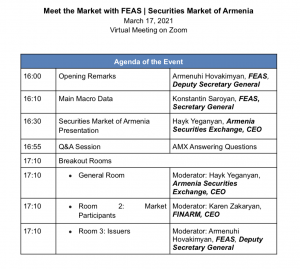 As we are visiting Armenia, FEAS Team will use special Armenian background, join us and  use this photo as Your background, to celebrate our visit to Armenia together.
Let’s have the Armenian Spirit tomorrow!
You can Download the Cover Photo below
About the photo: The Temple of Garni (Armenian: “Garnu tacar”) is located in the village of Garni in Kotayk Province, Armenia, and it was once a pagan temple dedicated to the Armenian sun god Mihr. Built in the middle of the 1st century CE, the Temple of Garni remarkably survived the destruction of pagan temples following Armenia’s conversion to Christianity in the 4th century CE, and countless invasions and earthquakes until its collapse in 1679 CE. After continuous excavations in the late 19th and early 20th centuries CE, the Temple of Garni was reconstructed between 1969-1975 CE. Today, it is the only free-standing Greco-Roman structure in Armenia and seen by many as a potent symbol of Armenia’s classical past as well as its deep historical ties to the civilizations of Greece and Rome. 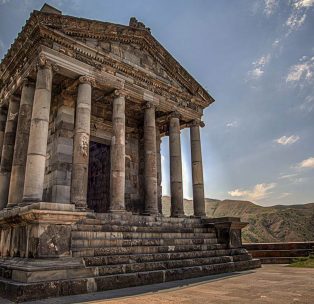