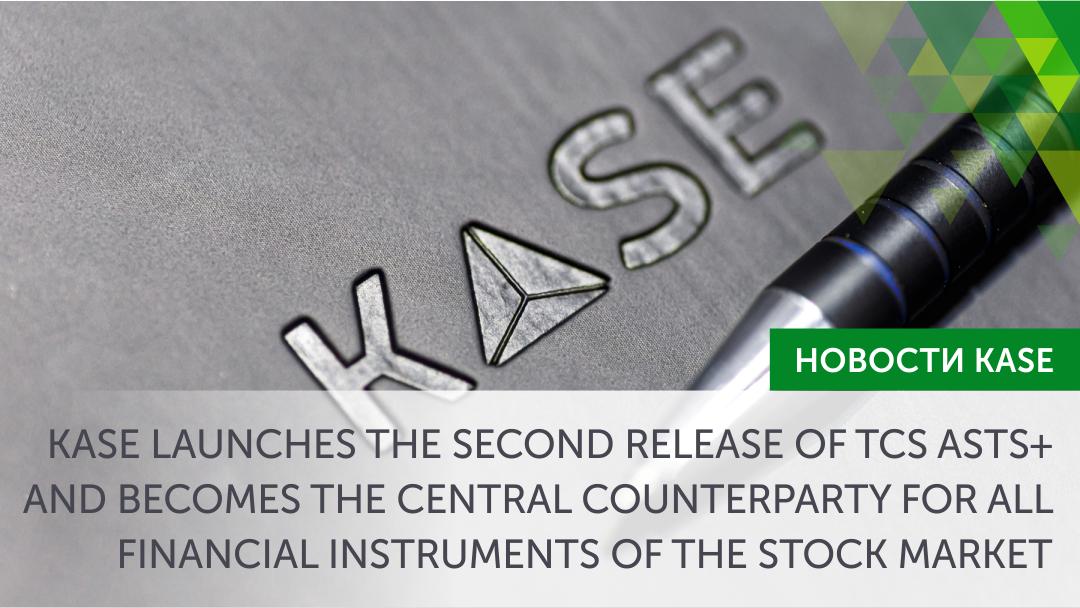 Since August 3, 2020, KASE has been acting as the central counterparty in the stock market on all deals in all securities, except for repo transactions with a series of financial instruments settled on a gross basis – on each particular deal.

The settlement organization for securities on all deals concluded on KASE is Central Securities Depository JSC, which also carries out monetary settlements on deals made without the participation of the central counterparty.

The ASTS+ was developed on the basis of the TCS of Moscow Exchange PJSC (MOEX) as part of the implementation of the Agreement on Strategic Cooperation between KASE and MOEX dated October 10, 2018, and has high performance, stability and an extensive set of trading modes for trading a broad range of financial instruments.

“We are pleased to announce the successful completion of a large-scale project to implement the new trading system ASTS+ and central counterparty services on the exchange stock market, which has been implemented for more than 1.5 years with the assistance of our clients, regulators and partners.
This is an important step under the strategic partnership with Moscow Exchange. Thanks to the well-coordinated and efficient work KASE and MOEX teams, the ASTS+ technology, which meets international standards, has become available to current and potential participants in our stock and money markets.

As part of the implementation of KASE’s development strategy for 2019-2021, KASE continues the significant upgrading of its IT systems aimed at improving the exchange’s services, launching central counterparty services in all exchange markets, which should help attract foreign participants to the market and, as a result, the increased liquidity of the stock market”, – noted Alina Aldambergen, Chairperson of KASE’s Management Board.

“The united team of our exchanges has completed the implementation of technologies of the Moscow Exchange for KASE’s stock and money markets of. The new technology of trading, clearing and risk management will allow us to offer market participants in Kazakhstan new instruments and services, will help increase the market liquidity. The next step is to update the platform of KASE’s currency market, which is scheduled to be completed by the end of this year. Today we have taken another step towards the approaching of the financial markets of Russia and Kazakhstan.
Unified technological standards of the markets will allow banks and brokers of the two countries to gain access to our exchange markets with minimal costs and offer their clients instruments of the two markets”, – pointed out Yuri Denisov, Chairman of the MOEX’s Management Board.

Thanks to the new trading and clearing system, for the first time on the regulated market of the Republic of Kazakhstan, netting of participants’ positions was introduced for all types of stock market transactions, including the purchase and sale and repo sectors. This will significantly increase the efficiency of management of liquidity of members of the Exchange and allow reducing their transaction costs.