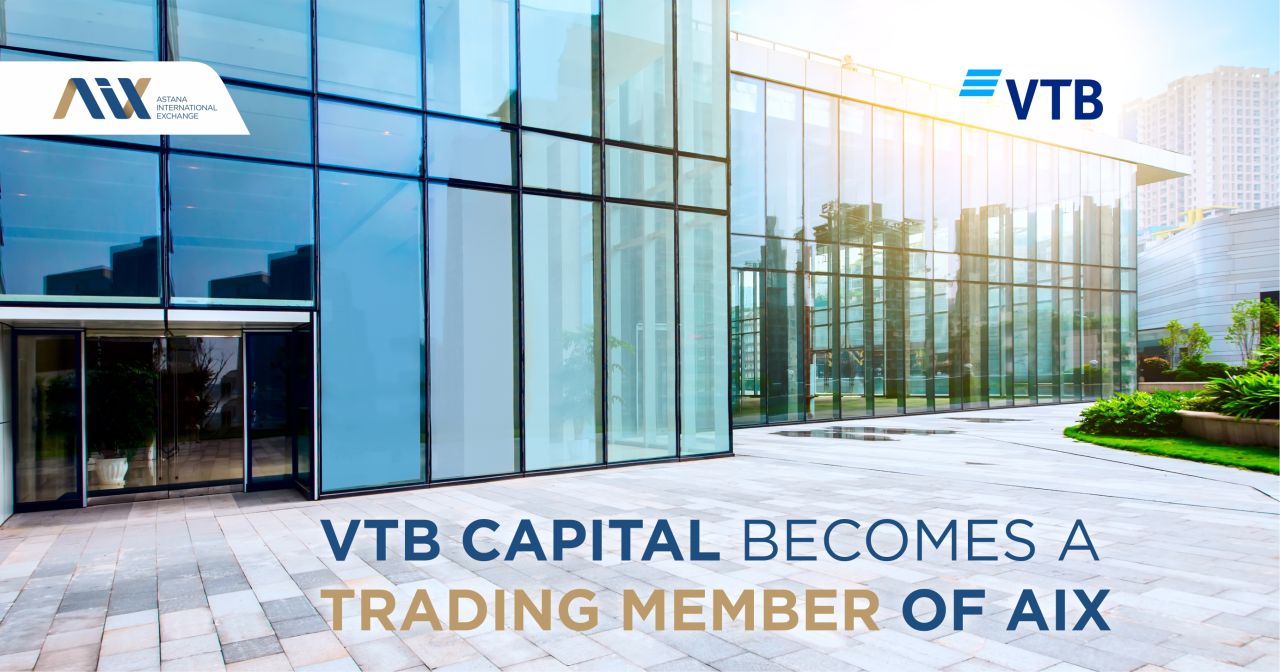 “VTB Capital is one of the largest investment banks in Russia, that operates not only in Russian but also across global markets. We are pleased that through VTB Capital’s clients’ access to AIX products, we will be able to attract more international investment and help increase the market liquidity.”

“VTB has been present in Kazakhstan for 11 years, during which we became one of the main Russian banks in the market and carried out a significant number of transactions to raise capital on international markets for the country’s leading private and state-owned companies. The strategy to facilitate access to the Kazakhstani local stock market for investment is attracting more and more local and international players. VTB Capital’s membership in AIX will expand the pool of investors who are interested in direct access to financial instruments already traded on AIX and to new issues of securities of Kazakhstani companies, which will contribute to the further development of the stock market and increase the investment attractiveness of the economy.”

AIX was formed in 2017 within the Astana International Financial Centre development framework. AIX shareholders are AIFC, Goldman Sachs, the Shanghai stock exchange, the silk Road Fund, and NASDAQ, which also provides the AIX trading platform. The exchange operates within a regulatory environment based on the principles of English Law, thus providing a reliable investment environment. The mission of AIX is to develop an active capital market in Kazakhstan and the region by providing clear and favorable conditions for attracting financing to private and public businesses. AIX develops special segments for mining companies as well as infrastructure projects under the Belt and Road initiative. More details: www.aix.kz

AIFC. The Astana International Financial Centre was created by the initiative of the First President of the Republic of Kazakhstan, Leader of the Nation, Nur-Sultan Nazarbayev as part of the “100 steps to implement five institutional reforms” national program. The Centre’s development strategy until 2025 was approved by the Management council of the AIFC during the council’s meeting on July 2, 2020. In accordance with the strategy, the vision of AIFC is in becoming the leading financial centre in the region that includes Central Asia, the Caucasus, EAEU countries, western China, Mongolia, and Eastern Europe. The mission of the AIFC is in assisting the sustainable and long-term development of the region. As the head of state Tokayev noted, “AIFC, with its unique opportunities, can act as a universal platform that connects the countries in the region.” The strategic directions for the sustainable development of the AIFC include the development of a circular economy, financial technologies, and “digital financial centre.”www.aifc.kz

VTB Capital. The Investment Business of VTB Group, is one of the three strategic business arms of VTB Group, along with the corporate and retail businesses. Since its foundation in 2008, VTB Capital has taken part in more than 164 ECM and DCM deals, which were instrumental in attracting more than USD 320bn worth of investments into Russia and the CIS. VTB Capital offers a full range of investment banking products and services, focusing on arranging operations in the debt, equity, global commodities markets, developing investment management, advising clients on M&A and ECM deals in Russia and abroad. VTB Capital has been repeatedly recognized as the best investment bank in Russia and on global markets by leading international publications, including Euromoney, EMEA Finance, Global Finance. VTB Capital has been a leader in the rankings of Dealogic, Bloomberg, Thomson Reuters and Mergermarket since 2009. The VTB Capital analytical team in 2018 became the best in Russia according to Institutional Investor and Extel Survey.